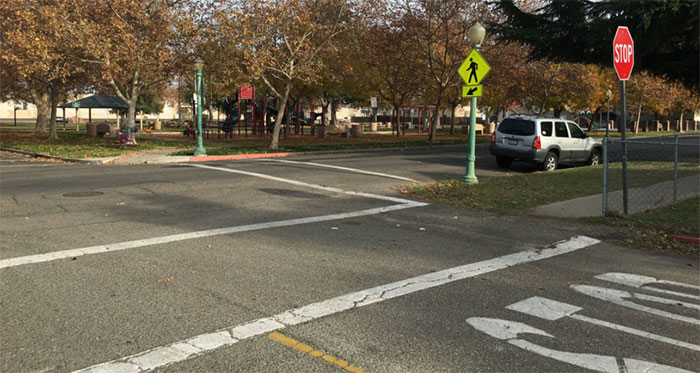 The City of Turlock follows State policies and the California Vehicle Code (CVC). The CVC requires the City to follow the requirements of the most recent version of the California Manual on Uniform Traffic Control Devices(CA MUTCD). Traffic control devices include signal lights, traffic signs, and paint markings. The CA MUTCD covers all aspects of the placement, construction and maintenance of every form of approved traffic control. The guidelines prescribe five basic requirements for all devices.

The CA MUTCD emphasizes uniformity of traffic control devices. A uniform device conforms to the regulations for dimensions, color, wording and graphics. The standard device should convey the same meaning at all times. Consistent use of traffic control devices protects the clarity of their messages. As stated in the State Manual, uniformity must also mean treating similar situations in the same way.

What is a Crosswalk?

Crosswalks are either marked or unmarked. The CVC defines a "crosswalk" as the portion of a roadway at an intersection, which is an extension of the curb and property lines of the intersecting street or is any other portion of a roadway which is marked as a pedestrian crossing location by painted lines. A marked crosswalk is any crosswalk which is delineated by white or yellow painted markings placed on the pavement. All other crosswalk locations are therefore unmarked.

How are Crosswalks Used?

At any crosswalk (marked or unmarked) drivers must yield the right-of-way to pedestrians. Crosswalks are marked mainly to encourage pedestrians to use a particular crossing. Studies conducted on the relative safety of crosswalks support minimal installation of marked crosswalks.

What Causes Accidents at Crosswalks?

Research suggests that marked crosswalks give pedestrians a false sense of security. Pedestrians often step off the curb into the crosswalk expecting drivers of vehicles approaching the crosswalk to stop. However, drivers frequently fail to stop and cause an accident. At all crosswalks, both marked and unmarked, it is the pedestrian's responsibility to be cautious and alert before starting to cross the street.

At mid-block crosswalks on multilane roadways, another frequent factor in causing accidents involves the driver of a vehicle in the lane nearest to the curb stopping for a pedestrian that is waiting to cross or who is already in the crosswalk. The driver of a second vehicle traveling in the lane next to the stopped vehicle tries to pass the stopped vehicle and hits the pedestrian, even though it is illegal for drivers to pass a stopped vehicle at a crosswalk. Pedestrians should be very cautious when walking in a crosswalk, especially when their visibility is limited by vehicles already stopped at the crosswalk.

When are Crosswalks Normaly Marked

Crosswalks are marked at intersections where there is substantial conflict between vehicle and pedestrian movements, where significant pedestrian concentrations occur, where pedestrians could not otherwise recognize the proper place to cross, and where traffic movements are controlled.

Examples of such locations are:
These examples follow the philosophy of marking crosswalks as a form of encouragement. In the first case, we are encouraging school children to use a crossing which is normally being monitored. In the second case, we are encouraging all pedestrians to avoid a prohibited crossing. It is the City's policy not to paint crosswalks at midblock locations where traffic is not controlled by stop signs or traffic signals. Painted crosswalks should only be used where necessary to direct pedestrians along the safest route.

When a marked crosswalk has been established adjacent to a school building or school grounds, it shall be painted yellow. Other established marked crosswalks may be painted yellow if either the nearest point of the crosswalk is not more than 600 feet from a school building or grounds. Crosswalks should be marked at all intersections on the suggested route to school, available from your local school. They should also be marked where there is high conflict between vehicles and students (while crossing), where students are permitted to cross between intersections, or where students could not otherwise cross. The best safety measure for school age children is to educate them on how and where to safely cross the street.

Transportation engineers world-wide are moving toward the use of symbol signs in place of word signs because they are easier for people to comprehend in a shorter amount of time. Easily recognized symbols also accommodate people who can't read English.

In the case of pedestrian signals, both word and symbol signs are currently in use.
Here's what they mean:
The flashing don't walk or upraised hand is a warning to people who have not yet entered the intersections that it's too late to safely cross the street before the traffic signal changes allowing cars to proceed. Signals are timed to allow plenty of time for people who have already started walking to safely cross the street.

Why Using the Pedestrian Push Buttons is Important

Where buttons are available to pedestrians, it's because the traffic signal is timed for cars, not for people on foot. If you don't activate the pedestrian signal by pushing the button, the traffic light won't give you enough time to safely cross the street. You only need to push the button once for it to be activated.

The signals assign your legal rights in the intersection, however, it is important to be cautious when crossing busy intersections.

The following suggestions are offered in the interest of safety:

The City takes our role in solving traffic problems very seriously, yet the ultimate burden of safety rests with you, the motorist. Although we receive numerous requests per year, we try to investigate your request as quickly as resource allow. We will respond after carefully evaluating your request. We appreciate your patience and understanding.

Effective August 10, 2020, and continuing until further notice, Development Services (Building, Engineering, and Planning Divisions) public counter will be closed. We will continue to assist you through scheduled appointments, our online services, email, mail, and by phone. Thank you for your understanding as we strive to provide customer service in a safe and effective manner.