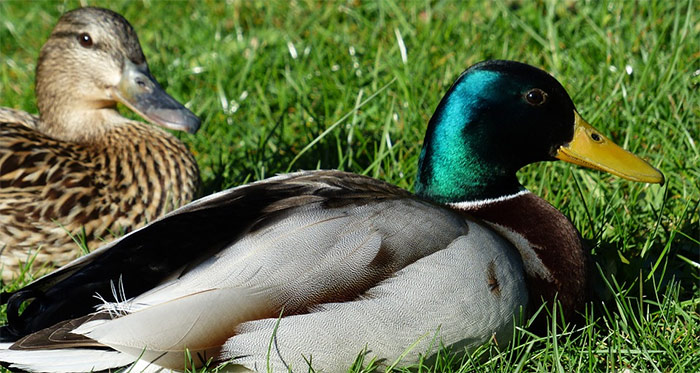 NEVER, EVER FEED DUCKS - IT ONLY KEEPS THEM FROM LOOKING FOR NATURAL FOOD ON THEIR OWN!

Cut back shrubbery to discourage mallard nesting building behavior. Make sure there are no hiding places to build a nest. Cover the pool to prevent the problem. If pool cannot be covered, float an inflatable swan (a natural enemy of ducks) in the pool. String reflective mylar strips above the pool so the ducks won't be able to land. Pool covers will save energy/electricity and water. Do not put food out for them; that will make them stay. Ducks should be discouraged from building their nests where the ducklings will be at real risk upon hatching. Such instances would be in backyards near pools, especially if the property is not close to any parks or golf courses that have water. There is normally no second chance for abandoned ducklings, their best chance for survival is with their mother. If you try to catch the mother, she may panic and fly away. She may not return to her young.

Look for a nest in nearby bushes, ivy or other groundcover. Remove the nest material so you won't end up with ducklings in the pool. It is not illegal to remove the nest or scare off the parents. It is illegal to harm them once they hatch. If you see a female mallard (the brown one) looking around in the bushes for a site to make a nest (often with the male following her), scare them off with a hose, loud noises, and be persistent about it. Keep deterring them so they will go somewhere else.

Ducklings in the Pool

Once they have hatched, and start getting in the pool, they will drown because they will not be able to get out. Provide a ramp for them to leave the water. Keeping the mother and babies together, encourage them to leave by shooing them out. Never get between the mother and her ducklings. Leave a gate open. She will lead her babies to the nearest water, even though you may not know where she is taking them. Do not attempt to pick up the ducklings for relocation; mom will fly away, often abandoning her young. Do not put food out for them, that will make them stay.

Never attempt to raise ducklings on your own

Rearing ducklings is a long, messy, time-consuming process. The ducklings need the instruction their mother gives them in order to find food on their own and to avoid predators. It takes at least two months to raise a brood. It is best to pass the youngsters on to an expert rehabilitator. It is against the law in California to raise native wildlife unless you are a licensed rehabilitator with the California Department of Fish and Game.

For more information or questions about animal bites, please contact:

The Turlock Animal Shelter will be accepting appointments for shelter operations from 10:00 a.m. to 2:00 p.m. Monday through Saturday. Shelter entry will be diverted to the Turlock Corporation Gate by appointment only.