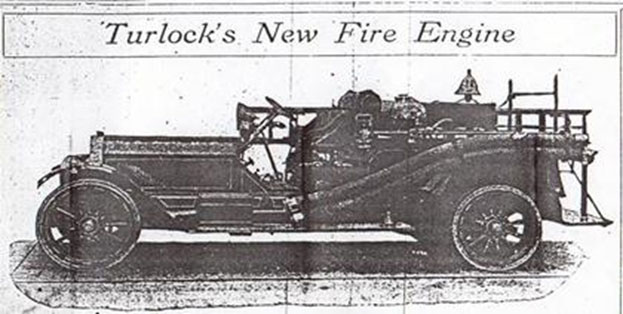 In 1893 and again in 1907 the Turlock area suffered two major fires that destroyed many of its existing downtown structures. To help combat future fire catastrophes, the merchants of Turlock banned together to buy the town's first fire pump and become part of the county's existing fire district. The year was 1908, Turlock was newly incorporated into cityhood and the population was beginning to grow.

In 1912 the county's fire district was dissolved and the new Turlock Volunteer Fire District was formed, with E.B. Osborn serving as the first fire chief. The city's first fire station was built on Front Street next to Hotel Carolyn and was used until around 1950.

As Turlock grew so did the fire department. In 1917 a Model T pumper was purchased and in 1922 the department acquired both a pumper and the city's first ladder truck. A fire horn was installed in Central Park, which emitted a series of blasts from an air tank. These blasts were actually a code for a particular street intersection. Firefighters would hear the blasts, and use a codebook to determine where the fire was located. As newer technology was developed, a switchboard and a phone system were adopted allowing the on duty firefighter to alert other volunteers and get a better and quicker response to emergency calls.

In the early 1950's Fire station #1 was moved to Minaret & Hamilton and Fire Station #2 was opened on the corner of Florence and Orange Streets. In 1957, Carol Chittock, the first full-time paid Fire Chief was hired. Since then five fire chiefs have taken charge of Turlock's department, each implementing newer and better services.

The Fire Department of Today

Today, the Turlock Fire Department has evolved into a highly skilled organization of full-time personnel. Engine companies are based in four stations strategically located throughout the city. Each station is staffed with a minimum of three firefighters who rotate working 48 hour shifts, 365 days a year; thus Turlock has Fire and Emergency Medical Service (EMS) protection at all times.